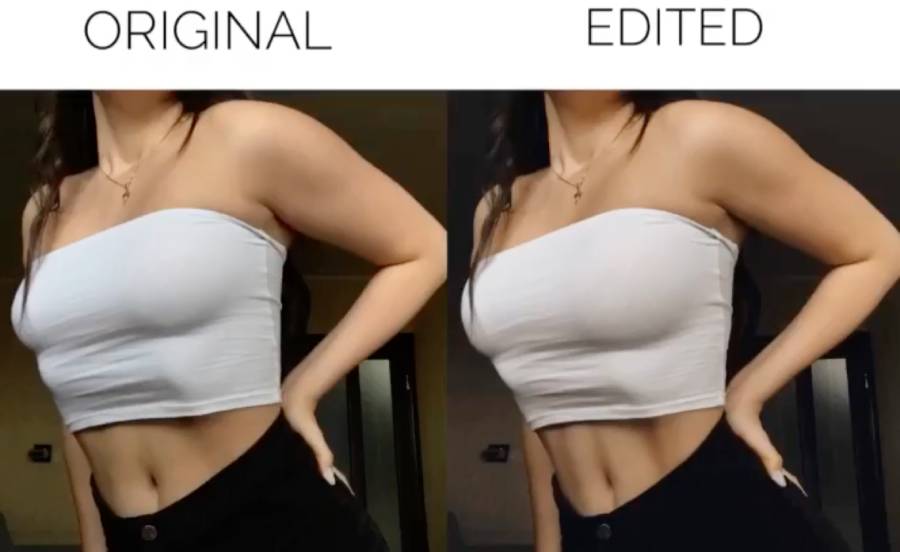 As the need for degree level skills in Photoshop to edit our pictures has subsided and apps marketing themselves as being specifically for social media image editing have grown in popularity, the practice of pimple fraud – aka, everyone editing out all visible ‘flaws’ from photos before posting them on Instagram – has been made even more common.

Between Facetune and BeautyPlus (my personal fave) it takes literal seconds to transform ourselves into whoever we want to be. One swipe, and all our blemishes, bloated bellies and under-eye bags are removed from memory. Even though it’s easier than ever to do this, the question of whether it’s morally sound to do so remains unanswered.

Everybody should feel like they can and should be unapologetically themselves – people get spots, it’s normal. People have stomachs that aren’t flat, hair that’s a bit limp and bodies that don’t look like Kim Kardashian’s, it’s normal. Accounts like BodyPosiPanda do a great job of reminding the world that it’s absolutely fine to be totally yourself, whatever ‘yourself’ is.

Realistically, the problem is not with twenty-somethings editing blemishes out of their birthday photos for their 1k Instagram following, but beauty standards that demand perfection like this in the first place. Instead of instilling shame into women for having their acne on show, or ingraining guilt to the ladies who edit it out, the attack should be led against the misogyny that makes both of these options seen as “unacceptable” by most in society.

“Editing is addictive,” comments Megan, a 24 year old who has been editing her photos for years. “It started with just a few smoothing bits here and there and then as I put weight on, I started making my arms and legs smaller on certain pics.” She continues, “Around twelve months ago I became newly single and was posting riskier pics online. I’d heavily edit them, smoothing out my skin, making my waist smaller, boobs bigger, slimming down my neck and I would then spend hours deciding if you could tell I’d Facetuned them as much as I had.”

The accessibility and overuse of editing apps, however, would not be as much of a problem if we were not shamed for using them. Deciding whether to alter our selfies is a double edged sword: Do we post an unedited photo and risk ridicule for not looking perfect, or do we put up the edited photo and receive negative comments about looking too perfect?

It is not like changing our appearance on selfies is a new trend either – Editing photographs has been available since the beginning of photography itself. From soft focus to colouring in film negatives, celebrities were altering their pics for decades before it became a mainstream technique. In the 90s, 00s and even now, gossip magazines and tabloids used the difference between edited images and unposed paparazzi pictures to make bank. By exposing celebrities’ beauty as “fake”, the public and these publications find joy in the unmasking and undoing of those we are meant to look up to in society. It follows that a similar kind of call out has made its way to our Instagram feeds too with accounts like Celeb Face and Beauty False amassing millions of followers.

But why do we thrive off of the failure of those we are supposed to look up to? As Christopher Rosa explained in Glamour three years ago, it is because we are conditioned to do so by a patriarchy that benefits from not just higher standards for women, but pitting women against each other. “Straight men control our news, entertainment, and now the entire country, which means they (and they alone) dictate our social norms.” Rosa explains, “And in their eyes, women need to behave and look a certain way: skinny, ‘polite,’ and mostly silent.”

He continues, “Any deviation from this trifecta is grounds for ridicule, shaming, and cruelty — which is why male-controlled media transforms female missteps into missile crises. As a society, we’re programmed to think this kind of behavior is ‘shocking’ (why else would tabloids cover it so fervently?) and mock it appropriately.”

As body shaming has crossed over from tabloids onto social media platforms like Instagram, it positions ‘normal people’ under the same ridicule as celebs. Those who aren’t trying to be in the public eye find themselves influenced by photoshop shaming accounts into thinking that editing their photos is wrong, while celebrities who do so heavily will – likely – never stop altering their images. It feels as though the double standard on Photoshopping pictures doesn’t affect those in power – celebrities and influencers – but instead damages those who are simply emulating them.

The matter of making fun of those that edit their pictures to try and look perfect is a problem that epitomises the patriarchy’s control over what a woman should be. The issue evolves from not only the pressure to appear flawless, but for said flawlessness to be authentic as well. This poses a new question: Who do we owe authenticity to?